Affidavits and Declarations are signed, written statements of fact that may be relied on in a number of legal and business scenarios.

An Affidavit is a legal document that allows a person to make certain declarations under oath. Declarations are similar to affidavits in that they are taken under oath and are used in making truthful statements of certain facts in a legal matter.

An Affidavit can be sometimes used in place of testimony in a court proceeding if a witness is unable to be present.

Common types of Affidavits include: 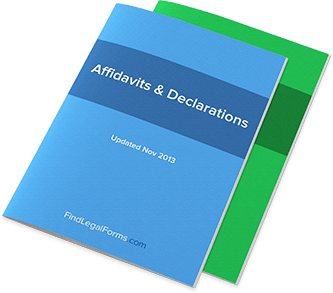 Affidavit Forms Combo Packages Get 5 forms for just $39.95. Save 53%! Save Money by getting our popular Affidavit forms together in one convenient packet.

What is an Affidavit?

In legal terms, an Affidavit is a written and sworn statement of fact. It is typically made by a person (referred to as an “affiant” or “deponent” depending on the context of the Affidavit) under oath and typically requires a witness to verify the signature. If the affiant is proven to be falsifying facts as outlined in an Affidavit, that affiant may be charged with perjury.

Typical Affidavits include voter registration applications, in which it is imperative that the affiant submitting the application is truthful about their information and circumstances so as to prevent voter fraud. Affidavits may also be used in court cases as witness testimony that is given outside of the witness stand itself.

There are a number of unique circumstances that call for the use of an Affidavit. For example, if a witness to a trial is unable to be there personally, it is possible that an Affidavit will be used in a deposition so that testimony can still be given. In such cases, the oath given is still considered valid and the deponent will have committed perjury if it was proven that they had given false information in the Affidavit.

A more common use of the Affidavit is in voter registration, wherein new applications will be expected to give their full and accurate information so as to prevent voter fraud.

What kind of Affidavits are there?

Generally speaking, there are four different types of Affidavits that you might expect to see for various situations. They include:

The nature of each Affidavit – a declaration of facts – remains the same across all Affidavits. But as each situation calling for an Affidavit might change, it’s important to use the right form to suit the circumstances.

Why is my Affidavit so short?

People who have seen a lot of legal documents in their time know that many of them can be long and contain a long list of provisions that can be difficult to understand. In contrast, a General Affidavit is actually a very short, simple, and straight-forward document.

The reason for this is that the Affidavit, as a written document, does not have the same validity requirements of most contracts. Because an Affidavit is simply a declaration of facts and not an agreement between two parties, an Affidavit’s role is to spell out who is doing the declaring, who witnessed the declaring, and which facts are being declared.

Of course, Affidavits will vary in both Affidavit type (see question above) and how they are executed from state-to-state.

Do I have to have an Affidavit notarized?

How should I word the facts in my Affidavit?

Because an Affidavit form will give you a lot of freedom in how you word the written facts, you’ll want to make sure that you do a good job of ensuring that those facts are both accurate and simple. Keeping the language simple will allow you to make declarations that are demonstrably true. It’s important to avoid vague language that is up to interpretation. Be honest and truthful and remember the phrase “nothing but the truth” when it comes to your oath. Plain, simple language is best.

When is an Affidavit enforceable?

In contract law, “enforceability” is a much bigger concern than it is for Affidavits. Affidavits, however, can be called “enforceable” because of the potential for perjury; if an Affidavit has been proven to be falsified, then the form itself will be enforceable against you, the affiant. Otherwise, without two parties as is the case in a written contract, the notion of enforceability will not have much relevance to Affidavits.

What are the requirements for an Affidavit to be valid?

First and foremost, the written requirements of the Affidavit must be met. This means that your name, address, county, and facts must be written into the Affidavit, as well as signed. Additionally, someone else must sign the Affidavit as a witness.

Because of the difference between two types of Affidavits – “Under Oath” and “Before Notary,” the requirements for your specific Affidavit may vary. In a General Affidavit before Notary, for example, it will be required that the Affidavit be validly notarized.

Additionally, the affiant must be of sound mind and under no coercion when signing the Affidavit – this is true for all testimony given under oath.

When is an Affidavit effective?

How to Use an Affidavit for the First Time

For a lot of people, the word “affidavit” doesn’t have a lot of meaning. They might have heard it on a legal TV show once, or they might have heard one of their lawyer friends mention it in passing. But the truth is there are a great deal of people out there who know exactly what an affidavit is without ever having graduated for law school, because an affidavit can be an important part of some of the most crucial events of our lives.

How do you define an affidavit? Quite simply, an affidavit is a sworn statement of fact, almost like putting a witness testimony to a truth down on paper – though it’s important to note that the legal ramifications of each type of testimony can be quite different. An affidavit simply refers to “has declared upon oath,” which is the meaning of where the word came from in Medieval Latin.

The truth is, you might have signed an affidavit before without having known.You knew you signed something and acknowledged it to be true under penalty of perjury, but you might not have realized that what you signed is technically an affidavit.

These affidavits are often used in sign-ups and registrations that are important for government participation such as in voter registration – if you sign that you agree that the statements are true and they are not, then you could face charges for perjury according to the law.

Affidavits will also be used in other events to gather witness testimony when a witness cannot be accessed – these are sometimes special circumstances and will often depend on the individual situation of a court or legal proceeding.

Knowing When to Use Affidavits

If you haven’t dealt with affidavits before, remember that the actual process of signing one is simple: you read through the information that is spelled out (and which you’re verifying for the purposes of the affidavit) and decide whether or not you want to have said what is said there. Make sure all the information you enter is true and accurate to your best knowledge, and then feel free to sign it. After all, there is not a lot of legal harm that’s going to come to you simply because you’ve put the truth to paper.

In some cases, you simply need to sign an affidavit as part of a larger form, as we saw in the voter registration example. If you’re confused still as to what constitutes an affidavit, be sure to search through FindLegalForms.com and find examples that you can use for reference. You’ll be glad you did.

Although the name might sound like incomprehensible legalese, the function of an affidavit can actually be both simple and vitally important. That’s because an affidavit is essentially a sworn statement of fact that is signed upon - it is a document that verifies someone’s statement as to a fact’s authenticity. In other words, it is a declaration. In many cases, a signed affidavit can have wide-reaching effects on a particular case, because affidavits often carry the same power as declaring something under oath, with the penalty of perjury a potential option if the affidavit turns out to be forged or untrue.

What role to affidavits have in our society?

You’re about to learn about their potential uses in individual legal cases as well as the kind of ramifications they can have on your life if you’re the kind of person who knows how to use contracts to help you navigate this complicated legal system of ours. Let’s take a closer look at affidavits and find out what they’re all about.

First, there are generally some parties involved in an affidavit that you’ll want to be aware of. The first is the affiant, generally the author of the statement who then signs it. The second is the witnessing party, often a notary public - someone that can officially notarize the document and ensure its authenticity.

The various parts of an affidavit will then have a tremendous impact on any legal matters pertaining to the contents of the affidavit. For example, it is important to have a commencement in the affidavit - this is an identifying section that points out exactly who is signing the affidavit. It is also crucial that the statement of truth, a vital section, which is exactly what facts the affiant is verifying the authenticity of. Another section, the attestation, verifies the date and signing of the affidavit. When you add these parts together, you get a very concrete legal document that carries the weight of a legal oath - not telling the truth on an affidavit can be equivalent to perjury and will contain similar punishments and legal entanglements.

They can often do so at the behest of others, helping another party by essentially “taking the stand” in advance, on their own. Having someone else’s affidavit handy can lend a lot of legal weight to the complaints another person is making against another person, which can help certain lawsuits settle out of court, for example. Affidavits can carry a lot of legal weight before a suit is even brought to court, meaning they essentially are a way to use legal “witnesses” before their need should ever arise. In many cases, affidavits can be used to prevent lawsuits, or to make sure that someone bringing a suit against you does not have a very strong case.

It’s important to understand the power an affidavit has and to respect the legal weight they carry - they certainly are not documents to throw around or sign without thinking.