Entertainment Agreements for use in Film, Music Production, Events and Publishing.

Entertainment Contracts are written agreements that apply to the fields of art, literature, television, movies, music and the like. Usually, they refer to agreements between companies and individuals such as writers and directors. However, agreements in the entertainment industry can be as diverse as licensing agreements and nightclub or bar disclaimer statements.

Some common Entertainment Contracts are: 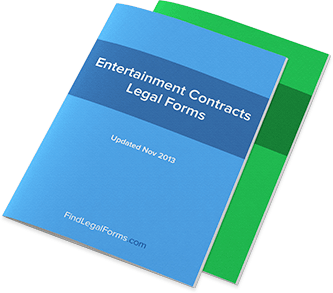 Event Combo Packages Get 10 forms for just $39.95. Save 77%! Forms commonly used by those who plan events such as parties or weddings. These forms include an event space agreement and amendment and service agreements for a caterer, photographer, florist and disc...

What are Entertainment Contracts?

What are some examples of different types of Entertainment Contracts?

Though some might object and say that these types of contracts are too wide-ranging and diverse to be easily summarized, it’s worth looking at a few popular examples of these contracts in order to better understand what constitutes an entertainment contract.

These three, of course, are just a few examples from the wide-ranging categories all falling under the “Entertainment Contract” umbrella.

What industries require the use of Entertainment Contracts?

There are a lot of industries that will be able to find some use out of at least some entertainment contracts, from the core industries – film, television, publishing, etc. – to industries that only sometimes touch on entertainment, such as filming the occasional commercial which requires the hiring of actors. For that reason, just about any industry that does business on a large scale will likely require the use of an Entertainment Contract at some point. Additionally, even small, independent outlets (such as independent music labels and independent artists) will want to use Entertainment Contracts on a regular basis in order to ensure prompt payment and that business can be handled in writing.

Can Entertainment Contracts be used to circumvent copyright protection?

There is no way to circumvent copyright protection without violating the law, but it is possible to use copyrighted material with permission through the employment of the correct contracts. These include Licensing Agreements, Copyright Assignments and the like. As contracts, these agreements obviously require the consent of two or more parties – so there is no way to “circumvent” the issues surrounding copyrighted material. There are usually only two options for using copyrighted material: receiving permission to use it, and to use it illegally. Obviously, you’ll want to use the former strategy and not the latter.

Are there any types of Entertainment Contracts which apply to more than one industry?

There are a few that fit the bill. For example, a Synch & Performance License for Use of a Composition on a Soundtrack is an agreement used to license the rights to use a song for the soundtrack of a movie – this obviously merges both the film and music industries. Another example is the Merchandise Agreement, which can merge just about any genre of entertainment with the role of merchandising.

I work in the entertainment industry, but my company is small. Do I still need to use Entertainment Contracts? Of course. In fact, the argument could be made that small and independent companies will need to rely more on these contracts to ensure that no business is lost because of conflicts with another party.

What are the requirements for an Entertainment Contracts to be valid?

Like all contracts, Entertainment Contracts require a few basic necessities in order to be considered valid in the justice system. For instance, signors must be of the age of consent or at least have parental supervision for the signing of the contract. Additionally, there has to be adequate consideration for both sides – that is, both sides must receive some sort of lawful value out of the agreement. This is in order to prevent contracts and agreements that actually border on illegal servitude rather than a legal exchange of goods and services.

In the entertainment industry, there are additional requirements for a contract to be considered valid that may complicate issues in some cases – for example, if someone in a union signs a contract that is contrary to the union rules, there may be a chance that that contract is subsequently ruled to be invalid.

That would depend upon your way of defining “different.” Yes, there are separate contracts for in-person appearances – speeches, dramatic performances, live music shows – but that doesn’t mean these contracts are in some way inherently different from other contracts that exist in the entertainment industry. It is always the case that both parties should use a contract that fits their situation appropriately, whether or not they are used to a certain type of contract or not. This applies just as well to live performances. The good news is that there are plenty of available contracts to handle a wide range of these types of performances.